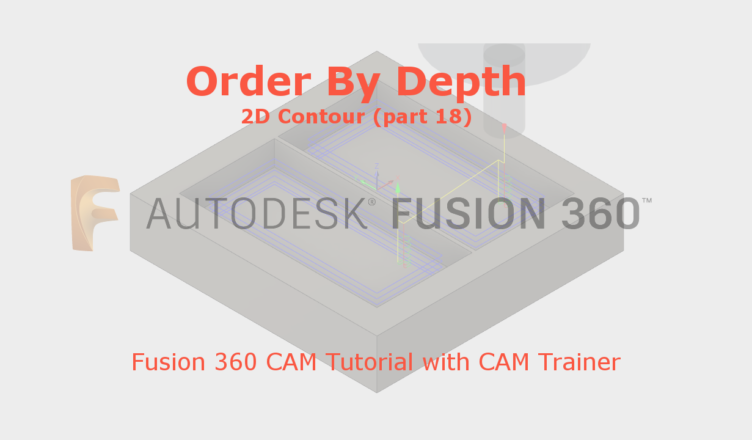 In the case of machining several separate parts segments, we can determine in which order the machining is to be performed. In the above figure, we have two areas. We can prepare the tool path so that the first area (in this case the contour) is machined at full depth completely before we proceed to the next contour machining. This is how it is done in the example shown in the figure above.

The option of Order by Depth, which in the above case was deselected, is responsible for this. So the order was followed by the area.

If we select this option. Of course, we will have a lot more movements in the air here, but there are situations where this kind of machining is necessary. For example, thin-walled elements, in which to keep the dimension or even be possible to do, you should process each side of the wall evenly.

If we first machined one side to the full depth, then when machining on the other side of the wall, problems could arise in the form of vibrations, “material would run away” or simply to break the wall.

In the case of thin-wall elements machining, we can handle using the above method or a little automating this process. In the above figure we have a standard machining of two internal contours, between which there is a thin wall, 1.5 mm thick. Using the standard machining, the first contour will be machined first at full depth, then the tool will pass to the next contour and start machining. There is a high risk that the wall after machining will not have the dimension assumed, and if the pockets were deeper, there would be a risk that part of the wall would be torn out. We can deal with this by using the Order by Depth option or by using the Use Thin Wall option.

After selecting this option, another Thin Wall Width parameter is activated, in which we can determine the wall thickness below which the wall will be considered thin.

If you have entered 2 mm, all walls having a thickness less than 2 mm will be treated as thin and machining will be prepared automatically using the thin-wall machining strategy. In this way, the wall will be evenly machined on each side.

However, if we set the thickness of the wall to 1 mm, our wall thickness of 1.5 mm will not be treated as thin and the processing will take place in a standard way. The Use Thin Wall option has the advantage of automatically recognizing whether to apply a thin-wall machining strategy or use standard machining.

Whether in a manual or automatic manner, in any CAM system (or even without a system), we can prepare machining similar to the machining strategy of the thin-walled elements presented above. Some CAM systems have these options, in others you may have to get a little tired. But theory is theory, and practice is practice. It will not always be as colorful as in the CAM system. The most important thing is to have an idea how to approach the problem.

Another option that can be useful is the Order by Step option.

By selecting this option, rough passes will be performed first and then finishing passes.